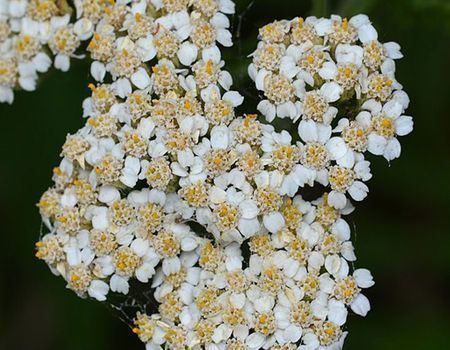 Etymology: Yarrow is thought to be derived from the same root as “yellow,” tracing back to Old High German usage. The genus name Achillea comes from the mythical Greek character Achilles, who reportedly carried it with his army to treat battle wounds. The specific name millefolium, as well as some of its common names, refers to its featherlike leaves.

One of the most widely used medicinal herbs, yarrow tea was taken for stomach problems, fever, and restful sleep. It was made into poultices for treating rashes, swelling, eczema, and spider bites. The astringent leaves treated hemorrhages; spitting blood, bloody piles, bloody urine, bowel complaints, and uterine bleeding. The dried leaves were smoked for catarrh.

Gather the uppermost few inches of stem with leaves and flowers attached. Brew tea by steeping flowers and leaves in boiling water for fifteen minutes, or make a sun tea. Flavorful tea can be used as a base for wild beers. Use the fresh or dried leaves as a seasoning in savory dishes. Preserve the leaves by bundling several stalks together and hanging to dry away from direct light or heat. The stems can be used as skewers in marinating and grilling. As a bitter tonic, yarrow flowers and leaves improve digestion if taken before a meal. The flowers are used to flavor alcoholic ferments.

Fresh or dried yarrow leaves disinfect wounds and stop bleeding. The bruised leaves make an excellent field poultice for deep cuts. Boil the uppermost leaves for fifteen minutes and strain to drink to treat colds and sweat out a fever. Apply the tea topically to relieve burns, bruises, and irritations. Cultivars of yarrow are less potent than the wild white-flowered plant. Stressful growing conditions in poor soil increases the medicinal qualities of yarrow.