Native Tree of the Year

Adkins Arboretum’s Native Tree of the Year Program highlights the ecological and ornamental value of native trees to promote their protection in natural areas and use in cultivated landscapes. 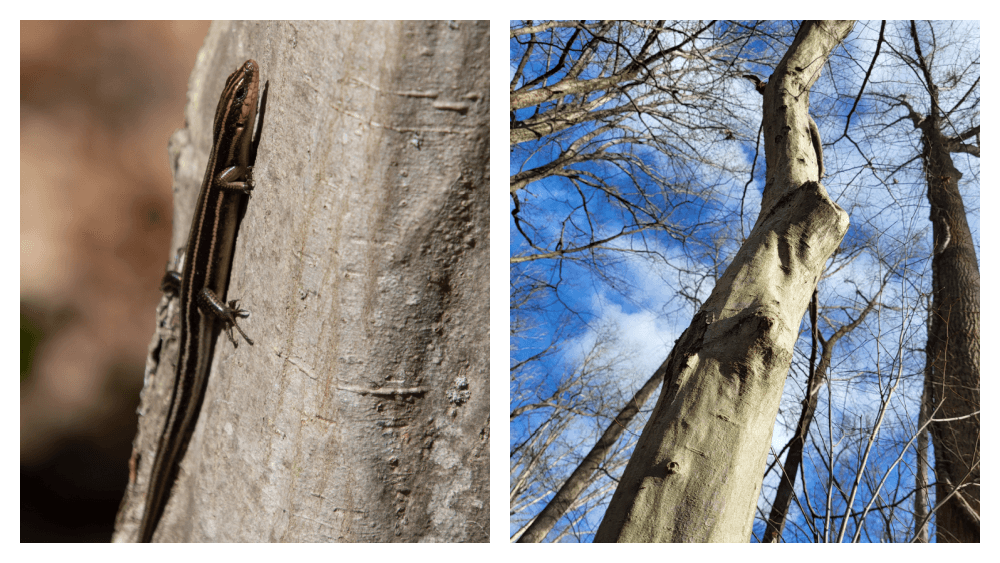 Winter walks on the trails at Adkins Arboretum reveal an understory composed primarily of paw paws, hearts-a-burstin', and a tree that some may confuse as a young American beech. These shorter and stockier trees are one of our favorites: ironwood (Carpinus caroliniana). Also known as American hornbeam, musclewood, or blue beech, this tree is one to get to know as you walk the forest.

You’ll find ironwood in the understory, growing in riverine, temperate forests. It can grow somewhat shrubby with multiple stems or as a small tree. Ironwood holds onto its delicately thin golden-tan leaves well into late fall. Once they drop, their dense, smooth, and rippled greenish gray trunks are their key identifier. The branches are a deep gray color, while the current year’s growth has a reddish brown hue. If you are fortunate enough to catch it when it is fruiting, you’ll see a cascade of clusters of tiny nuts, each with its own wing-shaped bract (called involucres). If you are looking to grow your own ironwood from seed, it will behoove you to know that the seed remains dormant until at least the second year.

Ironwood bears a striking resemblance to a few other native trees, namely American beech (Fagus americana), hop-hornbeam (Ostrya virginiana), and river birch (Betula nigra), though with some botanizing, you can learn to distinguish them. First, if you find yourself going cross-eyed looking at the leaves, a quick glance at the trunk will set you straight. Ironwood’s taut, smooth, and muscular appearance is the only one of its kind in this habitat. American beech has a smooth but not muscular appearance, river birch bark will peel in horizontal curls, and hop-hornbeam bark will appear loose or peel in vertical strips. The leaves require a close look: American beech uniquely has singly serrate leaves, while the others are doubly serrate. Hop-hornbeam will have branched lateral veins and a hairy petiole; river birches tend to have nearly hairless petioles and paired leaves. Ironwood fruits look very different from the nuts of American beech or the conelike nutlets of river birch. Ironwood and hop-hornbeam fruits can be confusingly similar, though the fruits of hop-hornbeam look like hops, with a nut enclosed in a sac-like bract, while ironwood has overlapping involucres in pairs. Got it? Yes, you do!

Found throughout Maryland, ironwood is the host plant for a variety of butterflies, including the eastern tiger swallowtail (Papilio glaucus), and many moths, including the American dagger moth (Acronicta americana) and banded tussock moth (Halysidota tessellaris). In addition to feeding many lepidopterans, ironwood foliage and twigs are tasty fodder for deer and the nutlets are browsed by mammals and birds alike.

For botany enthusiasts, there are two subspecies of ironwood: subsp. caroliniana, which is found on the Atlantic coastal plain and in parts of the Mississippi valley, and subsp. virginiana, which is found in the Appalachian Mountains, Minnesota, and Arkansas. Ironwood is a common denizen of the understory in temperate forests on the East Coast. Its shallow and widespread root system indicates it could provide good erosion control in the floodplain. Ironwood was historically prized for its strong and dense wood and was used for tool handles, among other things. Ironwood grows relatively slowly, reminding us that strength and perfection take time.

Look for ironwood on the plant availability list posted on our website starting in March and then again in the late summer!