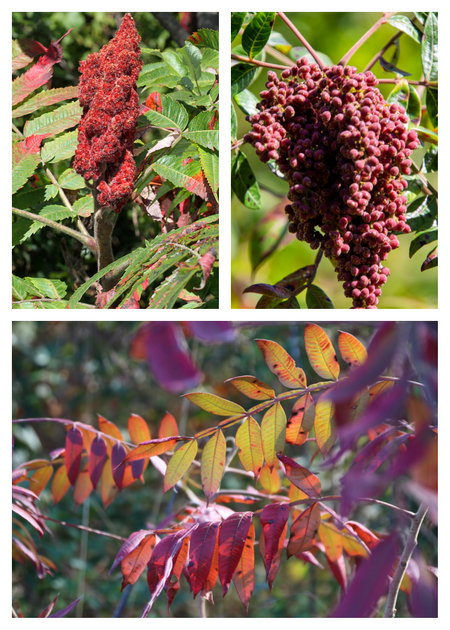 As a food, the sumac drupes were eaten or consumed as tea. The bark was eaten as a delicacy and sprouts were consumed raw. Rhus spp. has varied medicinal uses, including treating sunburn and blisters, venereal disease, and acting as a galactagogue, antiemetic, and antidiarrheal. The red berries were used to make a mouthwash and chewed to stop bedwetting. A decoction of leaves used as a bath was given to babies to make them walk. Craft uses included making red or black dyes from the drupes, and the inner bark to make a yellow dye. The dried red leaves and root were used for smoking and in ceremonial tobacco mixtures. As a craft product, sumac offers premier wood for making pipe stems, both long and short. It is easily split and carved out or burned out with a steel rod. Sumac wood has different colored layers used in designing craftwork.

In early spring the young, peeled shoots can be eaten raw or cooked, as long as they are solid green without a white pith. Harvest ripe berry-like drupes from June to September, but not after a rainstorm, which can wash off the malic acid flavor. Make a refreshing beverage by soaking overnight in a jar of cool water (or swish the drupes in water vigorously), then strain before serving. Add raw honey to sweeten, or use unsweetened in marinades and salad dressings. Grind the dried drupes to make a savory seasoning similar to za’atar for use in a variety of dishes. Preserve by freezing the whole fruit clusters in freezer bags with all the air pressed, or making ice cubes with the frozen liquid infusion.

Caution: Individuals with cashew allergies may want to avoid sumac species because they are in the same plant family. Avoid poison sumac (Toxicodendron vernix), which has white drupes that hang down like grapes, rather than standing up above the leaves.