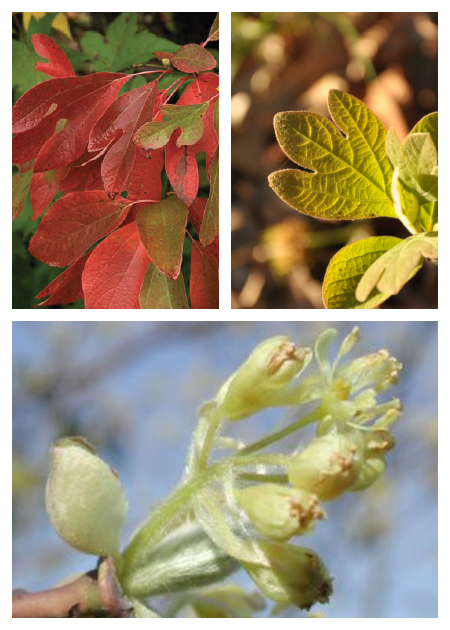 Etymology: Sassafras is believed to be from the Spanish word for saxifrage, possibly an adaptation of a lost indigenous word that sounded similar. The specific epithet Albidum is from the Latin albus for “white.”

Sassafras had many medicinal uses as a tea to purify blood and heal ailments including skin diseases, rheumatism, venereal disease, and ague. The roots and berries made a tea to treat nausea, fevers, fatigue, gas pains, menstrual pains, and syphilis. It was used as a poultice for wounds and sores, a wash for sore eyes, and an antihelminthic. The steeped root bark treated diarrhea, flux, colds, and overfatness. The roots were used to make poultices for wounds and skin infections. Used externally, a decoction made from the root was an antiseptic. With the root bark scraped off for tea, the large flattened woody core of the root would be burned and scraped to make utensils. Other craft uses included scenting soap and making furniture. The flowers were mixed with beans for planting.

Gather the leaves anytime they are green from the saplings of root suckers or by snapping off the ends of green twigs from smaller branches. Dry the leaves and use as a filé powder to thicken and flavor gumbo and soups, adding at the end of cooking. Store in airtight containers and use within six months. To harvest the roots and bark, look for 1- to 3-foot-tall saplings growing near mature sassafras trees. Dig them up. Simmer chopped roots and bark in water for tea, or sweeten and add seltzer or club soda for homemade root beer. Use bark and roots to make syrups, infused honey, and kombucha.