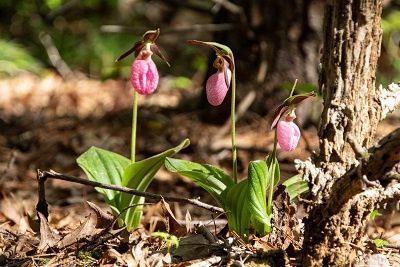 Although many people are familiar with the tropical orchids grown indoors and used in flower arrangements and corsages, not so many realize that native orchids thrive in neighboring bogs and woodlands.

There are several species of native orchids at the Arboretum. Three of these can be observed along the Arboretum paths: the cranefly orchid (Tipularia discolor), the downy rattlesnake plantain (Goodyera pubescens), and the pink lady's slipper (Cypripedium acaule, pictured).

Arboretum staff and volunteers monitor populations of pink lady's slipper orchid for the number of plants, flowering, and seed set. This orchid has beautiful pink flowers in spring but often fails to set seed due to poor pollination. Orchids appear to flower more readily when there is more light. To promote flowering, the staff trim trees around the orchid populations.